The web provides an unprecedented opportunity to accelerate innovation by evaluating ideas quickly and accurately using controlled experiments (e.g., A/B tests and their generalizations).   Whether for front-end user-interface changes, or backend recommendation systems and relevance algorithms, online controlled experiments are now utilized to make data-driven decisions at Amazon, Microsoft, eBay, Facebook, Google, Yahoo, Zynga, and at many other companies.  While the theory of a controlled experiment is simple, and dates back to Sir Ronald A. Fisher’s experiments at the Rothamsted Agricultural Experimental Station in England in the 1920s, the deployment and mining of online controlled experiments at scale—thousands of experiments now—has taught us many lessons.  We provide an introduction, share real examples, key learnings, cultural challenges, and humbling statistics.

I am glad to see that this has become a relevant topic for the conference, because many of us believe this is one of the most important topics that need to be addressed by both industry and academia. One of these people is Ron Kohavi, who delivered a great keynote on "Online Controlled Experiments: Introduction, Learnings, and Humbling Statistics", where he described his learnings of many years of AB Testing in Amazon and Microsoft. It is funny that I cited his KDD 2012 paper in two slides in my tutorial, not knowing that he was in the audience. I recommend you go through his slides, it was one of the best talks of the conference for sure.

During the talk, I asked the audience of about 270 to assess what was the outcome to 3 A/B tests.  Everyone started standing up, then had to sit down if they were wrong.  Since each A/B test has three outcomes (A wins stat sig, wins stat sig, or they're approximately the same), 1/3(^3) * 270 = 10, and about 8 people stayed standing at the end.   The room did about random (perhaps slightly worse). 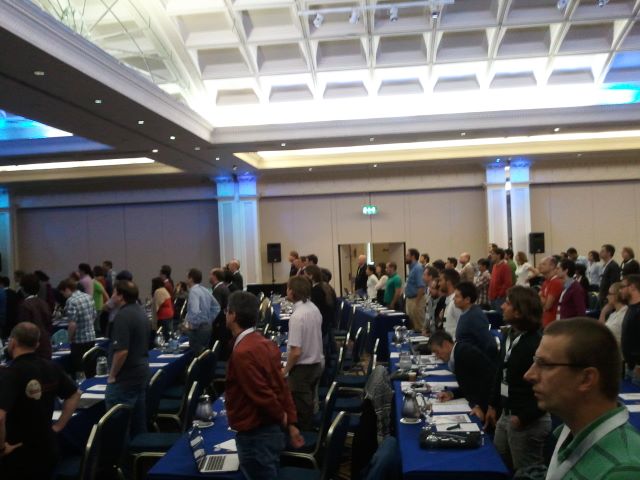 Quick link to this page: http://bit.ly/expRecSys